This one is from the chaoscontrol.org vault. Post 9/11, the newly created Department of Homeland Security provided a web service where developers could pull the latest threat level of a terrorist attack. It was a color-based system… red meant immenant threat from Al-Qaeda, they’re about to kick in your door! While green meant enjoy your American-brewed beer and Freedom Fries. 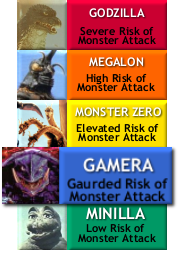 This service was undoubtedly designed for parody. So let me present to you some code that was written sometime in 2006-2007… Oversized Monster Threat Level. This php script would load the DHS’s threat XML response and show an oversized monster based on the current threat level. If it’s red, Godzilla is about to stomp your ass so you better GTF outta Tokyo!

It’s a bummer… the service is no longer online. Looks like it was shutdown around 2011 and now it just redirects to a “404” page with a Beagle on it named “K-9 Scout”.

But the code still lives online and is availble for your purusement - though it’s utterly useless :)

Recent tracks from my Last.FM profile as of